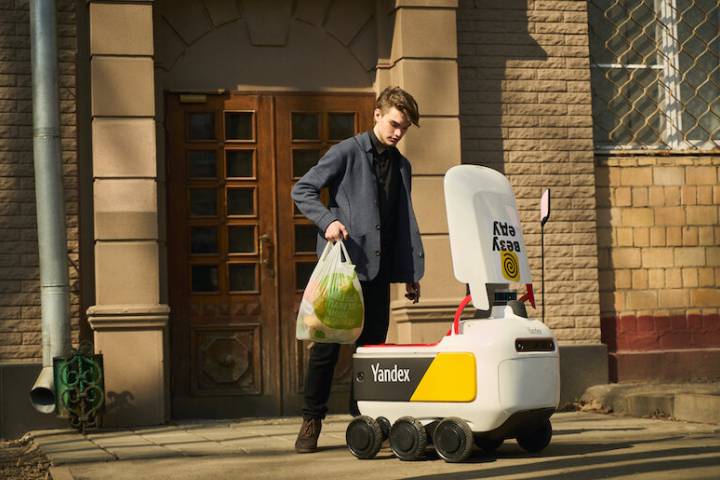 Yandex robots will begin delivering food to US university campuses this fall as part of a collaboration with food delivery service Grubhub. The Russian company sees this as an opportunity to monetize unmanned technologies and claims that robots will reduce shipping costs and will be able to bring orders to places that cannot be reached by car.

Yandex has agreed with the American food delivery service Grubhub for robotic delivery on campuses – student cities at colleges and universities in the United States, the press service of the Russian company said.

“With the” Rovers “, it will be possible to interact through the Grubhub application. For example, when he brings the order to the destination, the person will receive a push message, and the “Open the lid” button will appear in the application,” the company said in a statement.

Yandex Topped The Rating Of The Most Expensive Companies On The Runet.

The first campuses will join the program closer to autumn when students and teachers will return to them after the summer holidays, Yandex reported.

“Typically, campuses have a large area with many pedestrian zones. Rovers move along sidewalks and footpaths and will be able to bring orders to places that cannot be reached by car. The partnership will help Grubhub to improve the quality of delivery and reduce costs, “the press service added, noting that for Yandex, it is an opportunity to monetize unmanned technologies, including in foreign markets.

Yandex began testing autonomous courier robots in 2019. At first, the first machines carried documents from the doors of Yandex headquarters to the bus delivering papers to other Moscow offices of the company. Last spring, Yandex announced the first experience of using a robot outside its ecosystem: Rover began delivering parcels and documents at the Skolkovo innovation center. At the end of last year, Yandex. Rover drones began delivering orders from Yandex. Food users in Moscow and the city of Innopolis near Kazan.

“Rovers” can bring food from restaurants, groceries from supermarkets, orders from online stores, said Dmitry Polishchuk, head of the direction of unmanned vehicles at Yandex. “Rovers” move independently and are able to recognize objects around them, plan a route, avoid obstacles, let pedestrians and animals pass, says Yandex. However, according to Polishchuk, the difficulty of using the robot is that it cannot provide delivery to the door of an apartment in apartment buildings.