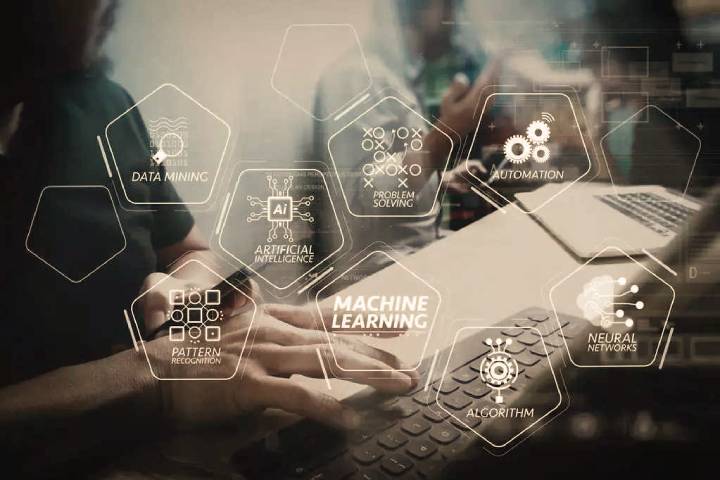 Conventional computers are good at calculating, but they are poor at some easy tasks for humans. For example, recall the example above: it is difficult for a machine to understand that “Drill Dexter 10 mAh”, “Drill Dexter 10”, “Drill Dexter acc 10” are the same device.

For a machine to think like a human, it needs to build a structure that looks like a human brain. These structures are neural networks. They consist of many artificial neurons, which, when trained, form connections and analyze information.

Neural networks work according to a single algorithm – they receive data at the input, “run” them through the network of their neurons and produce a result at the output; for example, assign the input data to a particular group. For a neural network to work, it must first be trained – a process called machine learning.

Let’s take an example. Imagine that you need to teach a neural network to distinguish between men and women from a photo. For this, you will need:

After training and tests, you can use the neural network to process big data. This is how the most straightforward neural network looks: information is fed to the input layer, processed internally, and the result is issued through the output layer.

Neural networks are usually used to sort data, classify it, and make decisions based on the input information. Usually, neural networks are used for a person’s tasks: recognizing a face, sorting photographs, and identifying a fraudulent banking operation for several signs. In such tasks, a neural network replaces dozens of people and allows faster decision-making.

It is often necessary not only to analyze and classify old data but also to make predictions based on it. For example, based on sales over the past ten years, guess what they will be next year.

Big data predictive analytics helps in such forecasts. The word “predictive” is derived from the English “predict” – “to predict, to predict”; therefore, such analytics are sometimes called predictive.

The task of predictive analytics is to highlight several parameters that affect the data. For example, we want to understand whether a large client will continue to cooperate with the company.

To do this, we study the base of past clients and see what “parameters” of clients influenced their behavior. This can be the volume of purchases, the date of the last transaction, Even non-obvious factors such as length of communication with managers. After that, we build a model that can determine the probability of failure for each client and warn about it in advance using mathematical functions or neural networks.

Predictive analytics are needed wherever you need to make forecasts. Traders were one of the first to use it to predict exchange rate fluctuations. Now such analytics are used in various fields to predict:

Industrial IoT platforms are being introduced at enterprises and factories: sensors collect data sets on equipment operation, and then analytics systems, including those based on machine learning, process them and predict breakdowns and maintenance times. Can deploy these IoT platforms d in the cloud: this reduces the cost of developing, managing, and operating IoT services and solutions.

Sometimes a situation arises in which you need to see how some indicators will behave when others change. For example, how sales will change if the price is increased. It is inconvenient to carry out such experiments in the real world – it is expensive and can lead to severe losses. Therefore, in order not to experiment with a real business, you can build a simulation model.

Let’s say we want to see how different factors affect store sales. To do this, we take data: sales, prices, number of customers, and everything else related to the store. Based on this data, we build a store model.

Then we make changes to it – we raise and lower prices, change the number of sellers and increase the flow of visitors. All these changes affect other indicators – we can choose the most successful innovations and implement them in the actual store.

Simulation is a bit like predictive analytics. Only we predict the future not according to natural but hypothetical data. Can build a simulation model without big data. But the more data, the more accurate the model, since it takes into account more factors.

You need to test some hypotheses, but it will be too expensive to test them in real business. For example, a large-scale price change can bring a business down over a long period, so it is better to test a model before making such a step.

It is important to remember that even in the scale model, not all factors are often considered. Therefore, modeling can give the wrong result; it is necessary to transfer the model to reality, considering all the risks.

Also Read: DRS As a Means Of Optimizing The Placement Of Virtual Machines In The Cloud Solutions