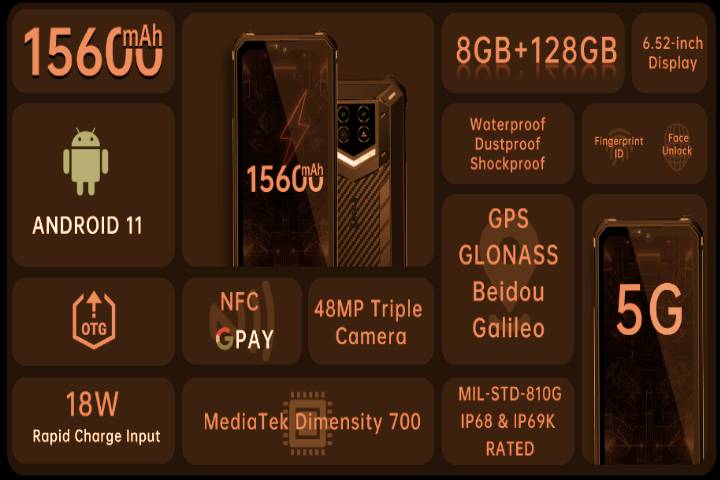 Oukitel WP15 is a rugged phone with military certification and a gigantic battery: it’s almost a power bank with a phone around it.

It is called Oukitel WP15 5G Smartphone and will arrive on the Chinese market on 23 August to be brought to international markets, as confirmed by the solid promotional campaign in English currently underway on social media. It is an exceptional smartphone: it is rugged and has a massive battery, plus it is also 5G.

Oukitel WP15 is a device intended, like all rugged models, for those with exceptional needs: explorers, construction workers, forest rangers and all those who need an extremely robust phone. To this feature, the Oukitel WP15 also adds a battery 3-4 times larger than a typical smartphone, with reasonably fast recharge. An overall low price considering that it is even an IP69K certified device: it not only resists the poles and diving in water but even tolerates high-pressure and steamy splashes of water. The Chinese price of Oukitel WP15 was set at
$ 299.99.

Oukitel WP15 is a medium-low-end smartphone, like many other rugged ones: for its intended purposes, you don’t need great power but very high reliability. The main chip is the MediaTek Dimensity 700 5G, flanked by 8GB of RAM and 128GB of storage.

The display is 6.52 inches, and the rear photographic compartment has three sensors, with the main one being 48 MP. You can unlock the phone with both the fingerprint and the face, which is very important in contexts where it is mandatory to wear gloves.

NFC is also compatible with Google Pay for contactless payments and a substantial satellite section: GPS, Glonass, Beidou and Galileo. All well protected from dust, water and shocks, so much so that there are I P 68, IP69K and MIL-STD-810G certifications (which, among other things, means that the phone works from -20 to +55 degrees Celsius of temperature).

But let’s get to the main feature of Oukitel WP15: the battery. It is a massive 15,600 mAh battery (charging up to 18 Watts), an incredible value when we consider that most modern smartphones have 4-5,000 mAh batteries.

Thanks to this battery, Oukitel WP15 can stay on standby for 1,300 hours, over 54 days, and remain on call for 90 hours, around three and a half days. Therefore, this rugged smartphone is excellent for use in extreme conditions, in places where there is not even an electrical outlet available to recharge the battery.

Oukitel does not declare the device’s weight, but it will be very high: a 15,000 mAh power bank weighs on average about 300 grams, so it is unlikely that Oukitel WP15 will weigh less than 4-500 grams.

Also Read: The Best Modem For Smart Working On The Beach