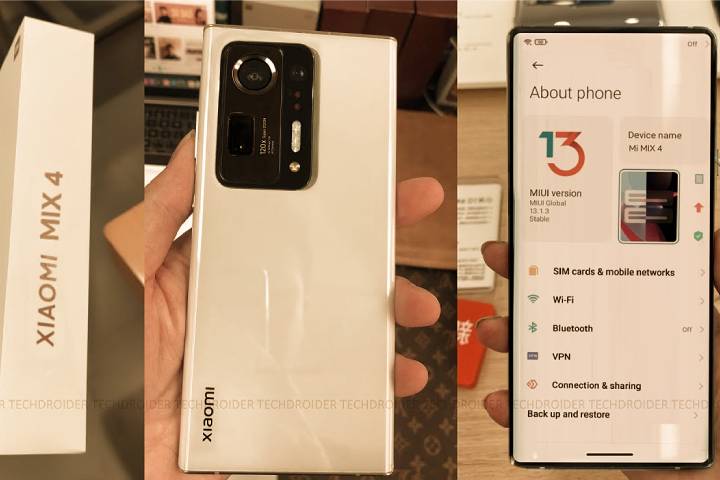 The latest model of Xiaomi’s Mi Mix series concentrates on innovative technology, but there are above all three characteristics that make it revolutionary.

In the end, it arrived, confirming all expectations and proving that, yes, Xiaomi has the right to apply for the first step of the world podium of smartphone manufacturers. We are talking about Mi Mix 4, the latest model of Xiaomi’s Mi Mix series, the one with which the Chinese manufacturer shows the world what it can do.

Xiaomi Mi Mix 4 is extraordinary in many respects, all concentrated in a smartphone that is not a concept but a natural product, which can be used every day and change the way we use the smartphone every day. The base and it is only the base, is that of a ” normal ” top of the range 2021: Qual comm Snapdragon 888+ processor (slightly more powerful version of the already powerful Snapdragon 888 ), flanked by 8 or 12 GB of fast LPDDR5 RAM and 128, 256 or 512 GB of UFS 3.1 storage memory, the best performing available at the moment. So far, nothing strange, another top of the range does the same or will do so soon.

Not even the excellent rear photographic compartment is surprising: 108MP primary sensor with optical stabilization, 13MP wide-angle secondary, 8MP periscope zoom 5X (50X with digital) also with optical stabilization. What are three features of this smartphone that change the way mobile is used? Three features that on Xiaomi Mi Mix 4 we find all together on a single device.

Other smartphones, particularly those of ZTE, have the ” USC ” (Under screen Camera) camera, but Mi Mix 4 is 20 MP. Then, the screen area that hides the camera has an incredible pixel density: 400 dots per inch, a very high value that makes the selfie cam area indistinguishable from the rest of the display.

UWB is a technology that is becoming more and more important every day: it means ” Ultra Wide Band ” and is a type of radio connection at 500 MHz. We have already seen it on the iPhone 11 and 12, which use it to track the little ones precisely. AirTag GPS tracker.

Xiaomi wants to do much more: allow fast connection with smart home devices compatible with this technology. Because Xiaomi already produces dozens of products for the Internet of Things under various brands of the group, the presentation of a smartphone equipped with UWB means only one thing: the Chinese manufacturer is creating its connected ecosystem, which has the smartphone in the center.

Xiaomi Mi Mix 4 has a 4500 mAh battery, which is not very much for such a powerful and well-equipped device that will consequently have high consumption. However, the Chinese giant has chosen to focus not so much on the battery but on recharging.

Which will be very fast: 120 Watts in wired mode, with the classic USB cable and a high-power charger, and 50 Watts in wireless mode, and those 50 Watts could have been even more: Xiaomi had to adapt to the recent safety regulations issued by the Chinese government, which set the maximum power of wireless chargers at 50 Watts.

According to the data provided by Xiaomi, the Mi Mix 4 recharges 100% using wired charging in just 15 minutes, which rises to 28 with the wireless one.

To these three features, which make Xiaomi Mi Mix 4 revolutionary, a fourth should also be added: the price. An astronomical price does not correspond to this smartphone’s very high-level technical datasheet.

In China, the price of Mi Mix 4 varies, depending on the memory configuration, between 657 and 829 euros (at the current exchange rate). It is not known whether this innovative device will ever leave the Chinese market to reach Europe and Italy. If it does, the price will undoubtedly be higher due to transport costs and taxes, but it will certainly remain at the price levels of many competitors who, however, offer much more minor.

Also Read: Official Honor Magic3: It Is A Top With A Porthole